Close Menu
You don’t pay a dime if we don’t win your case
• Free consultations to find out if you have a case
• Medical Treatment you need, when you need it!
Home > Attorney Profiles > Brian Angelini, Esq. 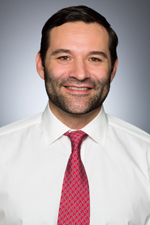 Mr. Angelini has experience representing clients from intake through trial. Mr. Angelini has tried jury and bench trials to verdict and has appeared in state and federal courts, including in various counties throughout the State of California. Mr. Angelini has more than thirteen years of Personal Injury experience and has litigated hundreds of cases, including an elder abuse/real estate/annuity case against one of the largest insurance companies in North America, where one month before trial and after successfully appealing a decision by the trial court after granting Defendant’s motion for summary judgment, settled the case for a significant undisclosed amount.

Mr. Angelini earned a BA with a double major in law, jurisprudence, and social thought and Spanish from Amherst College (2000) where he played on the varsity soccer team for four years. He earned a JD from Southwestern University School of Law (2004).  Mr. Angelini was born in Rosario, Argentina, and came to the United States at age five. He grew up in the San Fernando Valley where he attended Harvard-Westlake High School in North Hollywood, CA.

Mr. Angelini was a staff member of Southwestern’s Journal of Law and Trade in the Americas in 2003 and in 2004 became the Journal’s editor-in-chief. While in law school, Mr. Angelini clerked for the late and Honorable Stephen J. Hillman Magistrate Judge, Central District.

More..
Prior results, testimonials and/or endorsements do not constitute a guarantee, warranty, or prediction regarding the outcome of your legal matter. Every case is different.